HONG KONG, Aug. 6, 2018 /CNW/ – Seaspan Corporation ("Seaspan") (NYSE: SSW) is correcting its 2018 second quarter earnings release to reflect an increase in current liabilities of $35.6 million to accrue for dividends previously announced on June 28, 2018. There is no impact on the previously released net earnings, earnings per share, or cash flows. 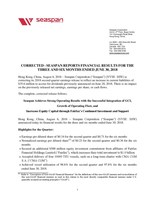 Highlights for the Quarter:

Bing Chen, President and Chief Executive Officer of Seaspan, commented, "I am pleased with our strong operating results for the second quarter. As expected, the acquisition and seamless integration of GCI contributed significantly to our growth. In addition to the vessels acquired through GCI in the first quarter, we grew our operating fleet with the delivery of four 10000 TEU containerships on long-term fixed rate charters with CMA CGM, and achieved a utilization rate of 98.6% for the quarter. We remain optimistic about improving industry dynamics for containerships."

Mr. Chen continued, "The additional investment by Fairfax announced in the second quarter increases its cumulative investment to $1.0 billion. The $500.0 million Fairfax equity investment is transformative to Seaspan as it increases our equity capital base and improves our access to capital."

David Sokol, Chairman of Seaspan Corporation, commented, "Our Board of Directors believes that the management team is doing an excellent job executing on its strategy to deliver long-term shareholder value. We are appreciative of Fairfax’s continued confidence in Seaspan. Today, Fairfax Financial Holdings owns 22 percent of Seaspan’s Class A common shares outstanding and will own an additional 38.5 million shares upon the exercise of warrants in January 2019. Seaspan appreciates having such thoughtful, long-term investors like Fairfax and the Washington Family, whose perspectives and insights are well-aligned with the Company’s longer term strategy."

On July 16, 2018, in accordance with the May 2018 definitive agreement, Fairfax exercised 38.5 million warrants at an exercise price of $6.50 per share resulting in Seaspan receiving $250.0 million in proceeds. Also in accordance with the May 2018 definitive agreement, Seaspan issued Fairfax warrants to acquire 25.0 million Class A common shares at an exercise price of $8.05 per share and the terms of the debentures issued in February 2018 and to be issued in January 2019 were amended to allow Fairfax to call for an early redemption for some or all of the debentures on each anniversary date of issuance.  As the right to put the debentures is solely within the control of Fairfax, the outstanding debentures will be reclassified from long-term liabilities to current liabilities as of July 16, 2018.  Upon funding of the additional debentures and exercise of the additional warrants upon closing in January 2019, these debentures will also be classified as a current liability.

Ownership days increased by 1,509 days primarily due to the addition of 16 vessels acquired through the GCI acquisition, which contributed 1,456 days.  The remainder of the increase was due to 2018 vessel deliveries and acquisitions and partially offset by vessel disposals.

The following table summarizes Seaspan’s vessel utilization by quarter and for the six months ended June 30, 2018 and 2017:

Revenue increased by 37.7% to $281.7 million and by 24.8% to $506.4 million for the three and six months ended June 30, 2018, respectively, compared to the same periods in 2017. The increases in revenue were primarily due to the additional operating days from the vessel deliveries and acquisition of vessels from the GCI transaction.

The increase in operating days and the related financial impact thereof for the three and six months ended June 30, 2018, relative to the same periods in 2017, is attributable to the following:

Ship operating expense increased by 31.1% to $58.8 million and by 19.8% to $108.3 million for the three and six months ended June 30, 2018, respectively, compared to the same periods in 2017. The increases were primarily due to an increase in ownership days from the increase in the number of vessels in Seaspan’s fleet, higher bulk purchasing of vessel stores and spare parts, and an increase in planned maintenance required for certain vessels less than 8500 TEU in size.

Depreciation and amortization expense increased by 24.7% to $62.1 million and by 16.3% to $116.0 million for the three and six months ended June 30, 2018, respectively, compared to the same periods in 2017. The increases were primarily due to an increase in ownership days from the increase in the number of vessels in Seaspan’s fleet.

General and administrative expense increased by 21.2%, to $9.1 million and by 9.2% to $16.3 million for the three and six months ended June 30, 2018, respectively, compared to the same periods in 2017.  The increases were primarily due to transition payments to the former chief financial officer, and additional general and administrative expense related to the acquisition of GCI, partially offset by a decrease in stock-based compensation related to the former chief executive officer.

Operating lease expense increased by 14.9% to $32.3 million and by 16.2% to $63.5 million for the three and six months ended June 30, 2018, respectively, compared to the same periods in 2017. The increases were primarily due to an increase in LIBOR and the delivery of one vessel in 2017 that was financed through a sale-leaseback transaction.

Interest expense and amortization of deferred financing fees increased by $29.0 million to $57.3 million and by $39.5 million to $96.2 million for the three and six months ended June 30, 2018, respectively, compared to the same periods in 2017. The increases were primarily due to the debt assumed as part of the acquisition of GCI, an increase in operating debt for delivered vessels, the issuance of the debentures to Fairfax and an increase in LIBOR.

The change in fair value of financial instruments resulted in a gain of $5.9 million and $25.2 million for the three and six months ended June 30, 2018, respectively. The gains for these periods were primarily due to the impact of swap settlements and increase in the forward LIBOR curve.

At June 30, 2018, we had a working capital deficiency of $532.6 million which includes $337.9 million of senior unsecured notes maturing in April 2019. The working capital deficiency may increase in future periods due to the classification of the Fairfax debentures to current liabilities as described in the subsequent events section.  In order to alleviate this deficiency, we will rely, in part, upon the continued financial support of Fairfax, which includes not exercising the debenture put right and the successful closing of the agreements described above under "Fairfax Investments".  We also expect to further address this deficiency through cash generated from operations and additional sources of funds in the capital markets to the extent available.

Seaspan is the leading independent charter owner of containerships with industry leading ship management services. We charter our vessels primarily pursuant to long-term, fixed-rate, time charters from the world’s largest container shipping liners. Seaspan’s operating fleet consists of 112 containerships with a total capacity of more than 900,000 TEU, an average age of approximately six years and an average remaining lease period of approximately five years, on a TEU weighted basis.

SEASPAN CORPORATION
RECONCILIATION OF NON-GAAP FINANCIAL MEASURES
FOR THE THREE AND SIX MONTHS ENDED JUNE 30, 2018 AND 2017
(IN THOUSANDS OF US DOLLARS, EXCEPT PER SHARE DATA)

Seaspan does not intend to revise any forward-looking statements in order to reflect any change in Seaspan’s expectations or events or circumstances that may subsequently arise. Seaspan expressly disclaims any obligation to update or revise any of these forward-looking statements, whether because of future events, new information, a change in Seaspan’s views or expectations, or otherwise. You should carefully review and consider the various disclosures included in this Annual Report and in Seaspan’s other filings made with the Securities and Exchange Commission that attempt to advise interested parties of the risks and factors that may affect Seaspan’s business, prospects and results of operations.