Enters into agreement to acquire APR Energy in $750 million transaction 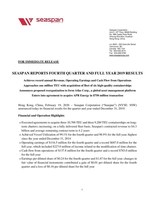 Bing Chen, President and Chief Executive Officer ("CEO") of Seaspan, commented, "2019 follows 2018 as another year of achievement and transformation for Seaspan. Our commitment to providing a best-in-class integrated platform focused on delivering long-term value for our stakeholders resulted in record performance across our key financial and operational metrics. Starting in 2018, we set out with a clear strategy focused on five key priorities, and as demonstrated by our results, our relentless execution has benefited all of our stakeholders. We've built a strong team equipped with core competencies to continue growing the container-shipping franchise and beyond. The proposed holding company reorganization to form Atlas Corp. is expected to provide us, as asset managers, with a solid foundation to expand our core competencies into power via the acquisition of APR Energy while augmenting our commitment to the container-shipping industry and customers. As we enter the second quarter of 2020, we believe that we are uniquely positioned to build on our strong momentum through a continued focus on our five key priorities."

Ryan Courson, Chief Financial Officer ("CFO"), added, "Over the course of the last two years we have made significant improvements across our capital structure adding $500.0 million of equity, restructuring nearly $2 billion of secured debt into an innovative portfolio financing program, and  increasing our balance sheet flexibility by adding a total of $450.0 million of liquid revolving credit capacity - with the long-term goal of achieving an investment grade credit rating. While focusing on strengthening our credit profile, we have also invested $2.2 billion of capital into high quality shipping assets, which has materially improved our long-term cash flow profile. We will continue to invest capital to create long-term value through the Atlas platform which we expect to be finalized by March, and we are very excited about the opportunities in front of Seaspan and APR."

Significant Developments in the Fourth Quarter and Subsequent Events

In November 2019, Seaspan entered into an agreement to purchase a fleet of six containerships for approximately $380 million in cash. Pro-forma to this acquisition, Seaspan's fully delivered global fleet of 119 vessels will reach approximately 975,000 TEU, representing a global market share of 7.7%(1), as measured by TEUs. Five of the six vessels were delivered in the fourth quarter, with the sixth vessel delivered on January 24, 2020.

In December 2019, Seaspan increased the committed amount under its portfolio financing program (the "Program") by $155.0 million. In February 2020, Seaspan expects to further increase the committed amount by $70.0 million to a total of $1.725 billion. The Program provides flexibility to continuously expand up to $2.0 billion. For further information regarding the Program, please refer to our quarterly reports on Form 6-K for the quarters ended June 30 and September 30, 2019 which were furnished to the U.S. Securities and Exchange Commission on August 14 and November 18, 2019, respectively

During the quarter ended December 31, 2019, Seaspan repaid borrowings in respect of four vessels, totalling $266.2 million, using proceeds from the Program.

In November 2019, Seaspan announced a proposed holding company reorganization to form Atlas Corp., a new global asset management platform. The proposed reorganization will be implemented through the merger of Seaspan and an indirect, wholly-owned subsidiary, with Seaspan continuing as the surviving corporation and a direct, wholly-owned subsidiary of Atlas Corp. The proposed reorganization is expected to advance the commitment of the Board of Directors and management to thoughtful capital allocation and diversification of cash flows through professional asset management. Bing Chen will be CEO and Ryan Courson will be CFO of Atlas Corp., as well as Seaspan.

In November 2019, Seaspan announced the proposed acquisition of APR Energy Limited ("APR"), a global leader in fast-track, mobile power solutions, in an all-stock transaction valued at $750.0 million, including the assumption of debt, for an expected equity value at closing of approximately $425.0 million using shares of Atlas Corp. valued at $11.10. APR is a global leasing business that owns and operates a fleet of specialty  assets (gas turbines and other power generation equipment) that provide power solutions to customers including large corporations and/or government backed utilities. APR focuses on maintaining high asset utilization through medium-to-long-term contracts to optimize cash flows across its asset portfolio. APR, like Seaspan, is a global leader in its asset class and offers a unique integrated platform to both lease and operate its assets.

Effective January 1, 2020, Seaspan's investment agreement with Swiber Holdings Limited was terminated due to certain conditions' precedent not being met.

Delisting of Seaspan Securities in Connection with Reorganization

The Board of Directors declared a quarterly distribution in the amount of $0.125 per share for its Class A Common Shares, paid on January 30, 2020 to shareholders of record as at the close of business on January 20, 2020. Regular quarterly dividends on the Preferred Shares Series D, Series E, Series G, Series H and Series I were also declared.

Results for the Quarter and Year Ended December 31, 2019

The following table summarizes Seaspan's consolidated financial results for the quarter and year ended December 31, 2019 and 2018:

Vessel Utilization increased for the quarter and year ended December 31, 2019, compared to the same periods in 2018. The increases were primarily due to a large decrease in the number of unscheduled off-hire days including fewer idle days.

General and administrative expense increased by 38% to $9.8 million and by 4.7% to $33.1 million for the quarter and year ended December 31, 2019, respectively, compared to the same periods in 2018. These increases were primarily due to legal and professional fees in the amount of $3.3 million recognized in the fourth quarter of 2019, associated with the acquisitions.

Operating lease expense increased by 14.2% to $37.9 million and by 18.9% to $154.3 million for the quarter and year ended December 31, 2019, respectively, compared to the same periods in 2018. The increase was primarily due to the amortization of deferred gains related to Seaspan's vessel sale-leaseback transactions, which are no longer recognized through operating leases. Upon adoption of Accounting Standards Update 2016-02 "Leases" on January 1, 2019, the remaining balance of these deferred gains were recognized through opening deficit as a cumulative adjustment, as discussed in previous Earnings Releases.

Interest expense and amortization of deferred financing fees decreased by $12.3 million to $42.8 million and by $10.6 million to $194.2 million for the quarter and year ended December 31, 2019, respectively, compared to the same periods in 2018. These decreases were primarily due to both the lower average interest rate and the average principal balance.

Seaspan is a leading independent charter owner and operator of containerships with industry leading ship management services. We charter our vessels primarily pursuant to long-term, fixed-rate, time charters to the world's largest container shipping liners. Seaspan's fleet consists of 119 containerships, including one vessel Seaspan has agreed to purchase, which has not yet been delivered, representing total capacity of more than 975,000 TEU. Seaspan's current operating fleet of 118 vessels has an average age of approximately seven years and an average remaining lease period of approximately four years, on a TEU-weighted basis.

Seaspan will host a conference call and webcast presentation for investors, analysts, and interested parties to discuss its fourth quarter and full year results on February 19, 2020 at 8:30 a.m. ET. Participants should call 1-877-246-9875 (US/Canada) or 1-707-287-9353 (International) and request the Seaspan call. The live webcast and slide presentation are available under "Events & Presentations" at www.seaspancorp.com.

This release contains forward-looking statements (as such term is defined in Section 21E of the Securities Exchange Act of 1934, as amended, or the Exchange Act) concerning Seaspan's operations, cash flows, and financial position, including, in particular, the proposed holding company reorganization and the benefits arising therefrom in terms of creating a global asset management platform, the proposed acquisition of APR and the benefits arising therefrom, the likelihood of its success in developing and expanding its business generally, the proposed delisting and deregistration of Seaspan's debt securities and redemption of its 2027 Notes. Statements that are predictive in nature, that depend upon or refer to future events or conditions, or that include words such as "continue," "expects," "anticipates," "intends," "plans," "believes," "estimates," "projects," "forecasts," "will," "may," "potential," "should" and similar expressions are forward looking statements. These forward-looking statements represent Seaspan's estimates and assumptions only as of the date of this release and are not intended to give any assurance as to future results. As a result, you are cautioned not to rely on any forward-looking statements. Forward-looking statements appear in a number of places in this release. Although these statements are based upon assumptions Seaspan believes to be reasonable based upon available information, they are subject to risks and uncertainties. These risks and uncertainties include, but are not limited to: