Achieves highest quarterly utilization rate since 2011 of 99.6%,
Closes $500 million accordion, increasing Portfolio Financing Program to $1.5 billion and finishes the quarter with over $912 million of liquidity 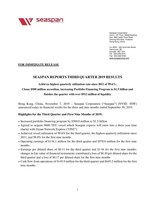 Highlights for the Third Quarter and First Nine Months of 2019:

Bing Chen, President and Chief Executive Officer, commented, "Our focus on Operational Excellence in quality, reliability, and scalability, together with Customer Partnership, as the preferred solution provider of our customers, has resulted in our highest quarterly utilization rate since 2011, of 99.6% for our 112 vessels fleet. We continue to strengthen our customer centric approach, which this quarter generated an attractive vessel acquisition to facilitate the growth needs of one of our customers, in addition to a tailored charter solution for another. We see growing opportunities to broaden and deepen our customer partnerships as our sector stabilizes into a new normal marked by consolidation, and we expect our momentum to continue throughout the remainder of the year."

Ryan Courson, Chief Financial Officer, said, "During the quarter we continued to execute across our business delivering, ahead of plan, a total of $645 million year-to-date cash flows from operations. We remain focused on the balance sheet as well, advancing our capital plan with the increase of our portfolio financing program to $1.5 billion of total commitments. The increased capacity provides room and flexibility to finance new acquisitions, including our recently acquired 9600 TEU vessel, which is expected to be delivered in April. The execution on our capital plan has significantly improved capital availability and flexibility, positioning us to execute on our next phase of growth."

On May 15, 2019, Seaspan entered into a credit agreement with a syndicate of lenders for a $1.0 billion secured credit facility as part of a portfolio financing program (the "Program"). The Program is secured by a portfolio of vessels (the "Collateral Pool") and bears interest at LIBOR plus 2.25% per annum. Seaspan may add, substitute and remove vessels from the Collateral Pool during the term, subject to a borrowing base, portfolio concentration limits, absence of defaults and compliance with financial covenants and certain negative covenants.

On September 18, 2019, Seaspan increased the committed amount under the Program by $500.0 million to a total of $1.5 billion. The additional commitments are subject to the same terms, conditions and Collateral Pool security requirements as the initial tranche.

On September 9, 2019, Seaspan closed an agreement to purchase a 2010-built 9600 TEU containership. The vessel is expected to be delivered by the end of April 2020, at which point Seaspan expects the vessel will enter into a 36 month fixed rate time charter with ONE. Subsequent to delivery of the vessel, Seaspan's fleet will expand to 113 vessels.

In October 2019, Seaspan refinanced secured term loan facilities, totalling $180.1 million, using proceeds from the Program. As of September 30, 2019, this balance was classified as current liabilities due to the issuance of voluntary irrevocable prepayment notices by Seaspan.

The Board of Directors declared a quarterly distribution in the amount of $0.125 per share for its Class A Common Shares, paid on October 30, 2019 to shareholders of record as at the close of business on October 21, 2019. Regular quarterly dividends on the Preferred Shares Series D, Series E, Series G, Series H and Series I were also declared.

Revenue decreased by 4.2% to $282.7 million and increased by 5.3% to $843.5 million for the three and nine months ended September 30, 2019, respectively, compared with the same periods in 2018. The decrease in revenue for the three months ended September 30, 2019 was primarily due to the changes in the daily charter hire rates of seven time charters which were modified in the first quarter of 2019, offset by higher operating days. Seaspan recognized $227.0 million of income from modification, and these seven charters were subsequently rechartered to other customers at market rates. The increase in revenue for the nine months ended September 30, 2019 was primarily due to the contribution of additional operating days from the acquisition of vessels from the GCI transaction and 2018 vessel deliveries.

The increase in operating days and the related financial impact thereof for the three and nine months ended September 30, 2019, respectively, compared to the same periods in 2018, is attributable to the following:

Depreciation and amortization expense decreased by 1.8% to $63.9 million and increased by 4.8% to $189.8 million for the three and nine months ended September 30, 2019, respectively, compared with the same periods in 2018. The decrease for the three months ended was primarily due to asset write-offs in 2018. The increase for the nine months ended September 30, 2019 was primarily due to an increase in ownership days from the period contribution of the acquisition of vessels from the GCI transaction and 2018 vessel deliveries.

Operating lease expense increased by 16.1% to $38.3 million and by 20.4% to $116.3 million for the three and nine months ended September 30, 2019, respectively, compared with the same periods in 2018. The increase was primarily due to the amortization of deferred gains related to Seaspan's vessel sale-leaseback transactions, which are no longer recognized through operating leases. Upon adoption of Accounting Standards Update 2016-02 "Leases" on January 1, 2019, the remaining balance of these deferred gains were recognized through opening deficit as a cumulative adjustment.

The change in fair value of financial instruments resulted in a loss of $22.1 million and $37.7 million for the three and nine months ended September 30, 2019, respectively. The losses for this period were primarily due to the impact of swap settlements and a decrease in the LIBOR forward curve.

As of September 30, 2019, Seaspan had total liquidity of $912.9 million, consisting of $258.9 million of cash and cash equivalents and $654.0 million available under its revolving credit facilities and term loan credit facilities.

Seaspan will host a conference call and webcast presentation for investors, analysts, and interested parties to discuss its third quarter results on November 7, 2019 at 8:30 a.m. ET. Participants should call 1-877-246-9875 (US/Canada) or 1-707-287-9353 (International) and request the Seaspan call (conference ID: 8690787). The live webcast and slide presentation are available under "Events & Presentations" at www.seaspancorp.com.

This release contains forward-looking statements (as such term is defined in Section 21E of the Securities Exchange Act of 1934, as amended, or the Exchange Act) concerning Seaspan's operations, cash flows, and financial position, including, without limitation, the likelihood of its success in developing and expanding its business. Statements that are predictive in nature, that depend upon or refer to future events or conditions, or that include words such as "continue," "expects," "anticipates," "intends," "plans," "believes," "estimates," "projects," "forecasts," "will," "may," "potential," "should" and similar expressions are forward‑looking statements. These forward-looking statements represent Seaspan's estimates and assumptions only as of the date of this release and are not intended to give any assurance as to future results. As a result, you are cautioned not to rely on any forward-looking statements. Forward-looking statements appear in a number of places in this release. Although these statements are based upon assumptions Seaspan believes to be reasonable based upon available information, they are subject to risks and uncertainties. These risks and uncertainties include, but are not limited to: