Continues to execute on capital plan, finishing the quarter with $776 million of liquidity 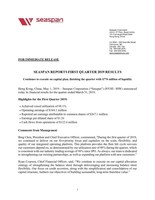 Highlights for the First Quarter 2019:

Bing Chen, President and Chief Executive Officer, commented, "During the first quarter of 2019, we continued to deliver on our five-priority focus and capitalize on the scale, flexibility, and quality of our integrated operating platform. This platform provides the fleet life cycle services our customers depend on, as demonstrated by our utilization rate of 98% during the quarter, which is consistent with our industry leading average of 98% since IPO. As always, our team is dedicated to strengthening our existing partnerships, as well as expanding our platform with new customers."

Ryan Courson, Chief Financial Officer, said, "We continue to execute on our capital allocation strategy of strengthening the balance sheet through deleveraging and increasing balance sheet flexibility. Our focus on credit accretion, along with the simplification and consolidation of our capital structure, furthers our objectives of building sustainable, long-term franchise value."

Significant Developments in the First Quarter

On January 15, 2019, pursuant to a previous subscription agreement, Seaspan issued to Fairfax Financial Holdings Ltd. ("Fairfax"), in a private placement, $250.0 million in debentures bearing interest at 5.5% and warrants to purchase 38,461,539 Class A common shares at $6.50 per share the ("2019 Warrants"). The 2019 Warrants were immediately exercised for $250.0 million in cash, resulting in total aggregate proceeds of $500.0 million from this transaction.

In January 2019, Seaspan prepaid $147.0 million on the remaining principal balance of a secured reducing revolving credit facility. As a result of the repayment, eight vessels were unencumbered.

On October 3, 2018, Seaspan entered into a binding term sheet to invest up to $200.0 million in Swiber Holdings Limited ("Swiber"). Upon closing, and pursuant to a definitive Investment Agreement entered into in March 2019, Seaspan will acquire an 80% post-restructured equity interest in Swiber for $10.0 million. If certain milestones are met, an additional $190.0 million will be invested in Swiber's LNG-to-power project in Vietnam in exchange for economic interests in the project.

During the normal course of business, Seaspan modified its charter arrangements with one of its top five customers, such that the existing time charters for seven vessels continued until the end of the day on March 31, 2019, after which all seven vessels were chartered to other customers, pursuant to new time charters. In connection with the modification, Seaspan received a payment of $227.0 million on April 1, 2019. This payment is recorded in accounts receivable as at March 31, 2019. As of the date of filing, all seven of these vessels have been rechartered.

The Board of Directors declared a quarterly distribution in the amount of $0.125 per share for its Class A Common Shares, paid on April 30, 2019, to shareholders of record as at the close of business on April 22, 2019. Regular quarterly dividends on the Preferred Shares Series D, Series E, Series G, Series H and Series I were also declared.

Repayment of 2019 Notes at Maturity

Ownership days increased by 1,600 days for the quarter ended March 31, 2019, compared to the same period in 2018. The increase was primarily due to the full quarter contribution from the addition of 16 vessels acquired through the acquisition of Greater China Intermodal Investments LLC ("GCI"), which contributed 1,152 days, and the remainder was due to the 2018 vessel deliveries.

Vessel utilization represents the number of operating days as a percentage of ownership days.

The following table summarizes Seaspan's vessel utilization for the quarter ended March 31, 2019, and its comparative quarters:

Vessel utilization increased for the quarter ended March 31, 2019, compared to the same period in 2018. The increase was primarily due to a decrease in the number of scheduled off-hire days for the 5-year survey, in combination with the higher utilization of vessels acquired from GCI.

Revenue increased by 26.9% to $285.3 million for the quarter ended March 31, 2019, compared to the same period in 2018. The increase in revenue was primarily due to the full quarter contribution of additional operating days from the acquisition of vessels from the GCI transaction and 2018 vessel deliveries and higher average charter rates for vessels that were on short-term charters.

The increase in operating days and the related financial impact thereof for the quarter ended March 31, 2019, compared to the same period in 2018, is attributable to the following:

Depreciation and amortization expense increased by 15.9% to $62.5 million for the quarter ended March 31, 2019, compared to the same period in 2018. The increase was primarily due to an increase in ownership days from the full period contribution of the acquisition of vessels from the GCI transaction and 2018 vessel deliveries.

General and administrative expense increased by 21.0% to $8.8 million for the quarter ended March 31, 2019, compared to the same period in 2018. The increase was primarily due to higher share-based compensation expenses and higher professional fees.

Operating lease expense increased by 25.8% to $39.2 million for the quarter ended March 31, 2019, compared to the same period in 2018. The increase was primarily due to the amortization of deferred gains related to Seaspan's vessel sale-leaseback transactions, which are no longer recognized through operating leases. Upon adoption of Accounting Standards Update 2016-02 "Leases" on January 1, 2019, the remaining balance of these deferred gains were recognized through opening deficit as a cumulative adjustment.

Interest expense and amortization of deferred financing fees increased by $18.1 million to $56.1 million for the quarter ended March 31, 2019, compared to the same period in 2018. The increase was primarily due to debt assumed as part of the acquisition of GCI, the issuance of the Fairfax Notes and the increase in LIBOR.

As of March 31, 2019, Seaspan had total liquidity of $776.2 million, consisting of $626.2 million of cash and cash equivalents and $150.0 million available under our committed two year revolving credit facility. Additionally, as of May 1, 2019, Seaspan's unencumbered asset pool included 37 vessels.

Seaspan will host a conference call and webcast presentation for investors, analysts, and interested parties to discuss its first quarter results on May 2, 2019 at 8:30 a.m. ET. Participants should call 1-877-246-9875 (US/Canada) or 1-707-287-9353 (International) and request the Seaspan call (conference ID: 1359879). The live webcast and slide presentation are available under "Events & Presentations" at www.seaspancorp.com.

This release contains forward-looking statements (as such term is defined in Section 21E of the Securities Exchange Act of 1934, as amended, or the Exchange Act) concerning Seaspan's operations, cash flows, and financial position, including, in particular, the likelihood of its success in developing and expanding its business. Statements that are predictive in nature, that depend upon or refer to future events or conditions, or that include words such as "continue," "expects," "anticipates," "intends," "plans," "believes," "estimates," "projects," "forecasts," "will," "may," "potential," "should" and similar expressions are forward‑looking statements. These forward-looking statements represent Seaspan's estimates and assumptions only as of the date of this release and are not intended to give any assurance as to future results. As a result, you are cautioned not to rely on any forward-looking statements. Forward-looking statements appear in a number of places in this release. Although these statements are based upon assumptions Seaspan believes to be reasonable based upon available information, they are subject to risks and uncertainties. These risks and uncertainties include, but are not limited to: