Achieves record annual Revenue, Operating Earnings and Cash Flow from Operations,
Closes the Second Fairfax Investment of $500 million, and
Takes steps to increase the number of unencumbered vessels to 32 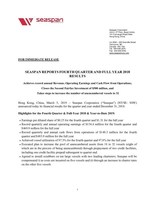 Bing Chen, President and Chief Executive Officer of Seaspan, commented, "2018 has been a year of transformation for Seaspan. We started out the year with our largest acquisition to date – GCI – which was seamlessly integrated into Seaspan, and helped us grow 2018 revenue by 32% over the prior year. With continued commitment from our founding shareholders, the Washington Family, we have added Fairfax Financial Holdings as a strategic financial partner. As of January 2019, Fairfax has invested $1 billion into Seaspan, and in the process became our largest shareholder. Throughout 2018, we worked relentlessly to strengthen our trademark operational excellence; in fact, this year marked our safest year on record, as measured by lost time injury frequency. Finally, we established a new leadership team during the year which, in partnership with the board of directors, has done an outstanding job of guiding the organization to achieve our targets. This remarkable year would not have been possible without each of our 4,600+ employees, and the partnership of our customers. Together, we have set the stage for a prosperous future for Seaspan."

Ryan Courson, Chief Financial Officer, added, "Throughout 2018 and into 2019, we have made significant progress in strengthening our balance sheet. Since the beginning of 2018, we have raised approximately $1.5 billion of capital, and in the process have substantially increased our equity capital base and improved our flexibility via our growing unencumbered fleet and committed corporate revolving credit facility. We will continue to augment our financial strength, while focusing on thoughtful capital allocation to position the business for long-term value creation."

Significant Developments in the Fourth Quarter

In November 2018, Seaspan made a repayment of $36.5 million for the remaining principal balance of one of its secured credit facilities; as a result, six vessels were unencumbered subsequent to year-end.

On October 3, 2018, Seaspan entered into a binding term sheet to invest up to $200.0 million in Swiber Holdings Limited ("Swiber"). Subject to the terms and conditions to be set forth in a definitive transaction agreement, upon closing, Seaspan anticipates acquiring an 80% post-restructured equity interest in Swiber for $20.0 million and, after meeting certain milestones, an additional $180.0 million would be invested in Swiber's LNG-to-power project in Vietnam.

"The share registration noted was simply an administrative task.  The Washington family is not selling any of its shares, and it remains one of the largest shareholders of Seaspan Corporation.  I will continue to serve on Seaspan's Board of Directors and remain committed to the long-term strategy of the Company," said Larry Simkins, a member of the Board of Directors of Seaspan and President of The Washington Companies.

On January 15, 2019, Seaspan closed its previously announced transaction (the "Second Fairfax Investment") with Fairfax Financial Holdings Limited ("Fairfax"), whereby Seaspan received proceeds of $500 million in exchange for $250 million aggregate principal amount of 5.50% Senior Notes due 2026 (the "2026 Notes"), and 38.5 million Class A Common Shares, which were issued in exchange for Fairfax's immediate exercise of warrants (the "2019 Warrants"). The aggregate purchase price of the 2026 Notes and the 2019 Warrants was $250 million and the proceeds from exercise of the 2019 Warrants was an additional $250 million.

On January 16, 2019, Seaspan made a repayment of $147.0 million for the remaining principal balance on a secured credit facility. As a result of the repayment, eight vessels will be unencumbered, subject to the completion of the associated collateral release documentation. As of March 5, 2019, Seaspan has 32 unencumbered vessels (with collateral in the process of being released with respect to eight of these).

The Board of Directors declared a quarterly distribution in the amount of $0.125 per share for its Class A Common Shares, paid on January 30, 2019 to shareholders of record as at the close of business on January 14, 2019. Regular quarterly dividends on the Preferred Shares Series D, Series E, Series G, Series H and Series I were also declared.

Results for the Quarter and Year Ended December 31, 2018

Ownership days increased by 1,939 days and 5,257 days for the quarter and year ended December 31, 2018, respectively, compared to the same periods in 2017. These increases were primarily due to the addition of 16 vessels acquired through the acquisition of Greater China Intermodal Investments LLC ("GCI"), which contributed 1,472 days and 4,688 days, respectively.  The remainder of the increase was due to 2018 vessel deliveries and acquisitions and partially offset by vessel disposals.

Vessel utilization represents the number of operating days as a percentage of ownership days.

The following table summarizes Seaspan's vessel utilization by quarter and for the year ended December 31, 2018 and 2017:

Vessel utilization increased for the quarter and year ended December 31, 2018, compared to the same periods in 2017. The increases in utilization were primarily due to a large decrease in the number of unscheduled off-hire days in combination with the higher utilization of vessels acquired from GCI. During the year ended December 31, 2018, Seaspan completed dry-dockings for seven 2500 TEU vessels, one 3500 TEU vessel and one 4250 TEU vessel, one of which occurred while the vessel was off-charter.

Revenue increased by 37.6% to $294.9 million and by 31.9% to $1,096.3 million for the quarter and year ended December 31, 2018, respectively, compared to the same periods in 2017. The increases in revenue were primarily due to the additional operating days from the acquisition of vessels from the GCI transaction, 2018 vessel deliveries and higher average charter rates for vessels that were on short-term charters.

The increase in operating days and the related financial impact thereof for the quarter and year ended December 31, 2018, relative to the same periods in 2017, is attributable to the following:

Ship operating expense increased by 15.6% to $55.6 million and by 19.2% to $219.3 million for the quarter and year ended December 31, 2018, respectively, compared to the same periods in 2017. The increases were primarily due to an increase in ownership days from the acquisition of vessels from the GCI transaction and 2018 vessel deliveries as well as higher bulk purchasing of vessel stores and spare parts. The increase in ship operating expense for the year ended December 31, 2018 was also due to the increase in planned maintenance required for certain vessels less than 8500 TEU in size.

Depreciation and amortization expense increased by 28.5% to $64.7 million and by 22.9% to $245.8 million for the quarter and year ended December 31, 2018, respectively, compared to the same periods in 2017. The increases were primarily due to an increase in ownership days from the acquisition of vessels from the GCI transaction and 2018 vessel deliveries.

Interest expense and amortization of deferred financing fees increased by $26.3 million to $57.6 million and by $95.7 million to $212.1 million for the quarter and year ended December 31, 2018, respectively, compared to the same periods in 2017. The increases were primarily due to the debt assumed as part of the acquisition of GCI, an increase in operating debt for delivered vessels, the issuance of the February 2018 debentures to Fairfax and an increase in LIBOR.

As of December 31, 2018, Seaspan had total liquidity of $507.3 million, consisting of $357.3 million of cash and cash equivalents and $150.0 million available under our committed two year revolving credit facility.  Additionally, as of March 5, 2019, Seaspan's unencumbered asset pool included 32 vessels (eight of which are in the process of being unencumbered).

At December 31, 2018, Seaspan had a working capital deficiency of $475.6 million, which includes $320.4 million of senior unsecured notes maturing in April 2019.  This deficiency is addressed by the closing of the Second Fairfax Investment on January 15, 2019 in which Seaspan received gross proceeds of $500.0 million.

Seaspan will host a conference call and webcast presentation for investors, analysts, and interested parties to discuss its fourth quarter and full year results on March 6, 2019 at 8:30 a.m. ET. Participants should call 1-877-246-9875 (US/Canada) or 1-707-287-9353 (International) and request the Seaspan call. The live webcast and slide presentation are available under "Events & Presentations" at www.seaspancorp.com.

This release contains forward-looking statements (as such term is defined in Section 21E of the Securities Exchange Act of 1934, as amended, or the Exchange Act) concerning Seaspan's operations, cash flows, and financial position, including, in particular, the likelihood of its success in developing and expanding its business. Statements that are predictive in nature, that depend upon or refer to future events or conditions, or that include words such as "continue," "expects," "anticipates," "intends," "plans," "believes," "estimates," "projects," "forecasts," "will," "may," "potential," "should" and similar expressions are forward‑looking statements. These forward-looking statements represent Seaspan's estimates and assumptions only as of the date of this release and are not intended to give any assurance as to future results. As a result, you are cautioned not to rely on any forward-looking statements. Forward-looking statements appear in a number of places in this release. Although these statements are based upon assumptions Seaspan believes to be reasonable based upon available information, they are subject to risks and uncertainties. These risks and uncertainties include, but are not limited to:

Forward-looking statements in this release are estimates and assumptions reflecting the judgment of senior management and involve known and unknown risks and uncertainties. These forward-looking statements are based upon a number of assumptions and estimates that are inherently subject to significant uncertainties and contingencies, many of which are beyond Seaspan's control. Actual results may differ materially from those expressed or implied by such forward-looking statements. Accordingly, these forward-looking statements should be considered in light of various important factors listed above and including, but not limited to, those set forth in "Item 3. Key Information—D. Risk Factors" in Seaspan's Annual Report for the year ended December 31, 2017 on Form 20-F filed on March 6, 2018 and in the "Risk Factors" in Reports on Form 6-K that are filed with the Securities and Exchange Commission from time to time relating to its quarterly financial results.